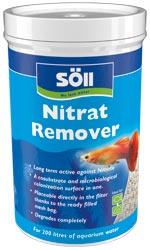 The breaking down of Nitrate degradation is caused by denitrifying bacteria, which depend on oxygen-free (anoxic) conditions. These conditions can not be created in conventional filters, which is why there is often too much nitrate in the water. The negative consequences are: increased algae growth as well as an increased disease susceptibility of the aquarium inhabitants.

NitrateRemover is the answer to natural nitrate reduction in the aquarium. The patented filter medium can form bacteria layers with a certain depth, known as biofilms, which have oxygen-containing and oxygen-free zones.

NitrateRemover consists of two rapidly degrading biopolymers (polyhydroxybutyric acid and polycaprolactone): a slowly degrading carrier material and a more rapidly degrading carbon source. The latter serves the microorganisms as food (co-substrate) for their own metabolism. By consumption, pores form on the granulate surface, which in this way is becoming ever larger and provides an additional colonization area for the microorganisms. Co-substrate and colonization area allow the formation of a powerful biofilm in which an oxygen gradient predominates. In depth, the denitrifying microorganisms find low-oxygen and thus particularly favorable living conditions.

NitrateRemover therefore increases the biomass and metabolic activity of denitrifiers present in the aquarium. Because the softer biopolymer component degrades faster, NitrateRemover does not stick. The granulate therefore does not have to be moved, but can be applied directly in the practical mesh bag.

100 g NitrateRemover is used to supplement up to 30 g of nitrate, thus contributing to better water quality in the long term. Water changes become less necessary, which reduces the stress for the aquarium inhabitants.

NitrateRemover also increases the carbonate hardness (KH) of the water.

Place the mesh bag in the filter. Depending on the nitrate content and water volume, NitrateRemover is completely degraded over time. Replace every 6 months